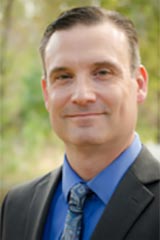 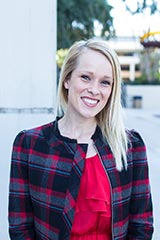 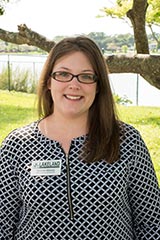 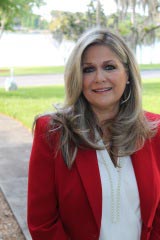 Prior to joining the Lakeland Chamber, he served as President/CEO of the Oviedo-Winter Springs Regional Chamber of Commerce in Oviedo, FL (2007-2014), as a Senior Legislative Assistant to Florida State Representatives Attkisson (2001-2002), Kallinger (2002-2004), Quinones (2005) and Adams (2005-2006) and also consulted independently on several local, state and federal campaigns.

Cory currently serves as Chair-Elect for the Florida Association of Chamber Professionals (FACP) and is also a member of the Board of Regents for the U.S. Chamber's Institute for Organizational Management (IOM).

He is married to his wife Shannon and together they have two daughters, Ella and Amelia.

Darla is a Lakeland native who returned home after serving as the National Director of Development for BEST Robotics. In this role she established and cultivated a national giving campaign involving large corporations, corporate foundations and legacy donors. Prior to her stint at BEST, Pettaway served as the Director of Development for the Herbert Wertheim College of Medicine at Florida International University. Sechrest Pettaway also spent time in Washington DC where she served as the Regional Donor Relations and Sales Manager for the American Red Cross. A seasoned business development and client relationship builder, Sechrest has extensive experience in establishing and cultivating long-term business-enhancing and social service programs that increase organizational revenue and impact the community foot print.

Prior to her stint with the American Red Cross, she served as the Foundation Manager for the Tampa Bay Buccaneers and spent the early years of her career honing her skills in various Community Relations roles within the Detroit Tigers Organization. During these tenures she bolstered many achievements including being named the Metropolitan Young Business Professional of the Year and surpassing designated goals for each year of employment.

Sechrest holds her M.A. in Business with certificates in Change Management and Business Innovation and a B.S. in Public Relations from Southeastern University.

Sarah is a Florida native (which explains why she loves the heat and humidity so much). She grew up in Fort Meade, and she attended Southeastern University where she graduated with a Bachelor of Arts in English. While at Southeastern, Sarah worked as a freelance writer at The Ledger newspaper and, after college, Charisma magazine. In 2011, Sarah moved to Jerusalem, Israel, to become a high school literature teacher. It was there she met her husband, Josh (a California native), who was already working there as a government teacher. They married in 2012 and moved to Lakeland. Sarah immediately began working for the Lakeland Chamber of Commerce as an Administrative Assistant for the Member Relations and Public Policy divisions. In 2014, Sarah and Josh returned to Jerusalem for one year.

She is now Chief Operating Officer, which includes serving as the Program Director for Leadership Lakeland. Sarah is the Chamber liaison for EMERGE Lakeland’s Steering Committee and the Leadership Lakeland Alumni Association, and she is a graduate of Leadership Lakeland Class 34, Leadership Polk Class 12, and EMERGE Serves Class 7. In addition, she is a member of The Lakeland Rotary Club (current Board member and District 6890 Speech Contest Chair) and serves on the Polk Vision Talent Pipeline Team/CFDC Education Committee, Homeless Coalition of Polk County’s Continuum of Care Governance Board (current Marketing Chair), Southeastern University’s College of Arts & Media Advisory Board, and is a community organizer for 1 Million Cups Lakeland. Sarah is DiSC® certified, and in August 2019 she completed her MBA with a concentration in Executive Leadership from Southeastern University.

Jackie is a tourism industry executive with more than thirty (30) years of Florida public/private sector tourism marketing experience. She began her career as the Director of Sales and Marketing for Hilton Corporation but found her love of the tourism industry at the Lakeland Chamber of Commerce. Her youngest son, Brian, was an All-American baseball player—and the 2012 John Olerud Award winner for the University of Florida—drafted in the first round in 2012 with the Boston Red Sox. Her daughter, Brooke, earned a full softball scholarship at the University of Florida and is currently in Physician’s Assistant School. Her oldest son Billy set homerun records at Flagler College and is currently in Sales Management in the beverage industry. Needless to say, she has spent her share of years on baseball and softball fields. 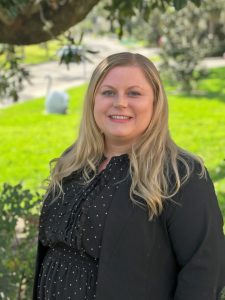 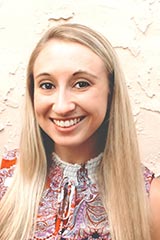 Amber is a native of the Tampa Bay area. She has been a Chamber Professional for 15 years beginning her career with The Greater Brandon Chamber of Commerce and was part of the Florida Association of Chamber Professionals Management team from 2010-2013. Amber’s Chamber career began when she was hired as an Information Specialist, at just 17 years old. From there, she has held many roles in Chamber event planning, programming, administration, retention and sales. She and her spouse Steven have a 6 year old girl named Sydney. They enjoy cooking, outdoor sports and spending time with family. Amber is excited to bring her extensive Chamber experience to our community and be a part of the Lakeland team.

Tora was born in Indiana but has grown up in Lakeland since she was 3. She attended Southeastern University where she received her BS degree in Marketing and later an MBA with a concentration in Executive Leadership. Her professional experience before coming to the Chamber includes Marketing Director over multiple Chick-fil-A locations, Regional Account Sales and SAP work for Coca-Cola Beverages Florida, and SAP work for IT Authorities. In 2013 she married her high school best friend Kyle, and they reside in South Lakeland with their 5 fur children (3 dogs, Nestle, Ruger and Chewy, and 2 cats, Ruffles and Blu). In her free time Tora enjoys competitive powerlifting, eating, wine, and traveling. 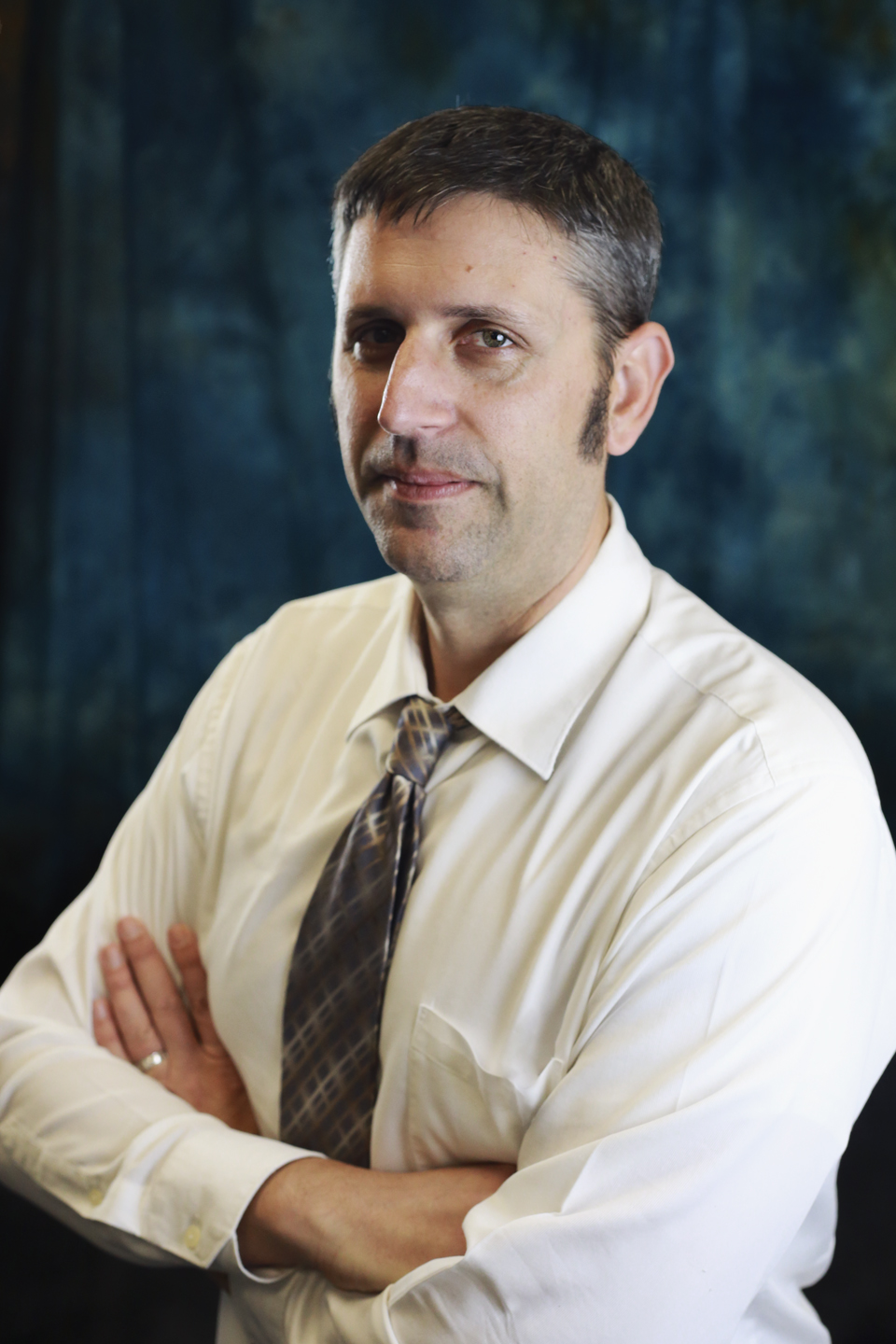 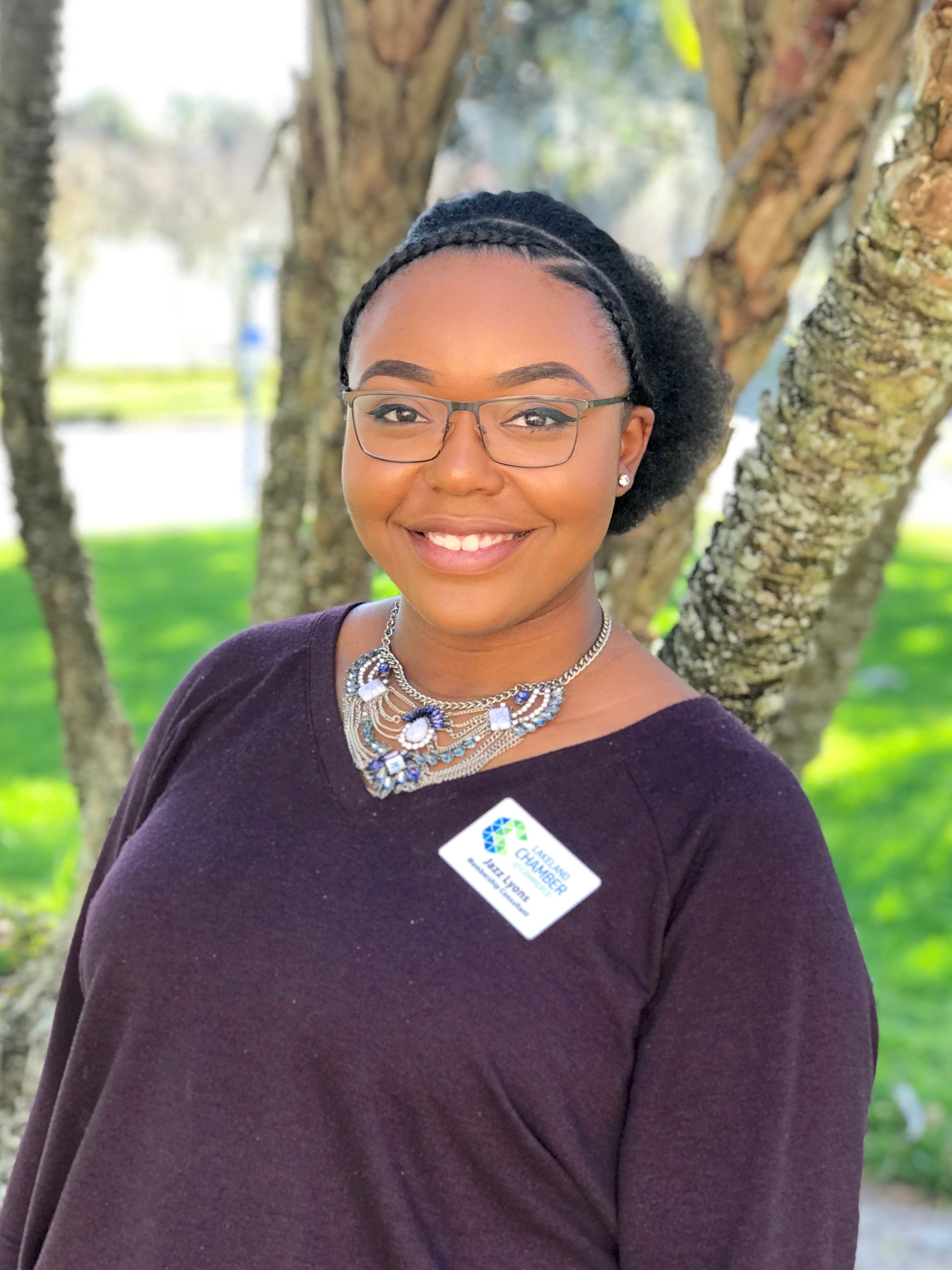 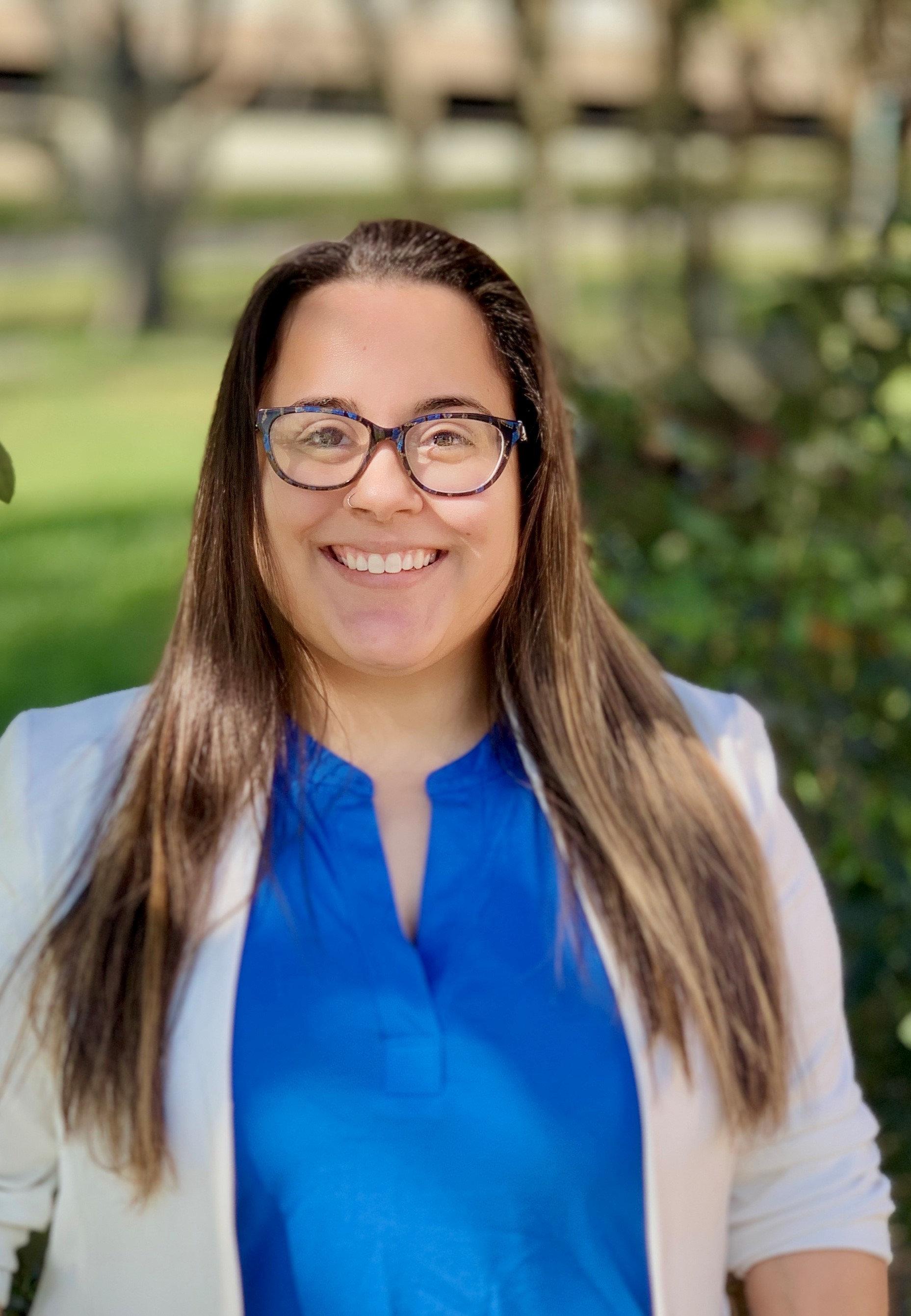 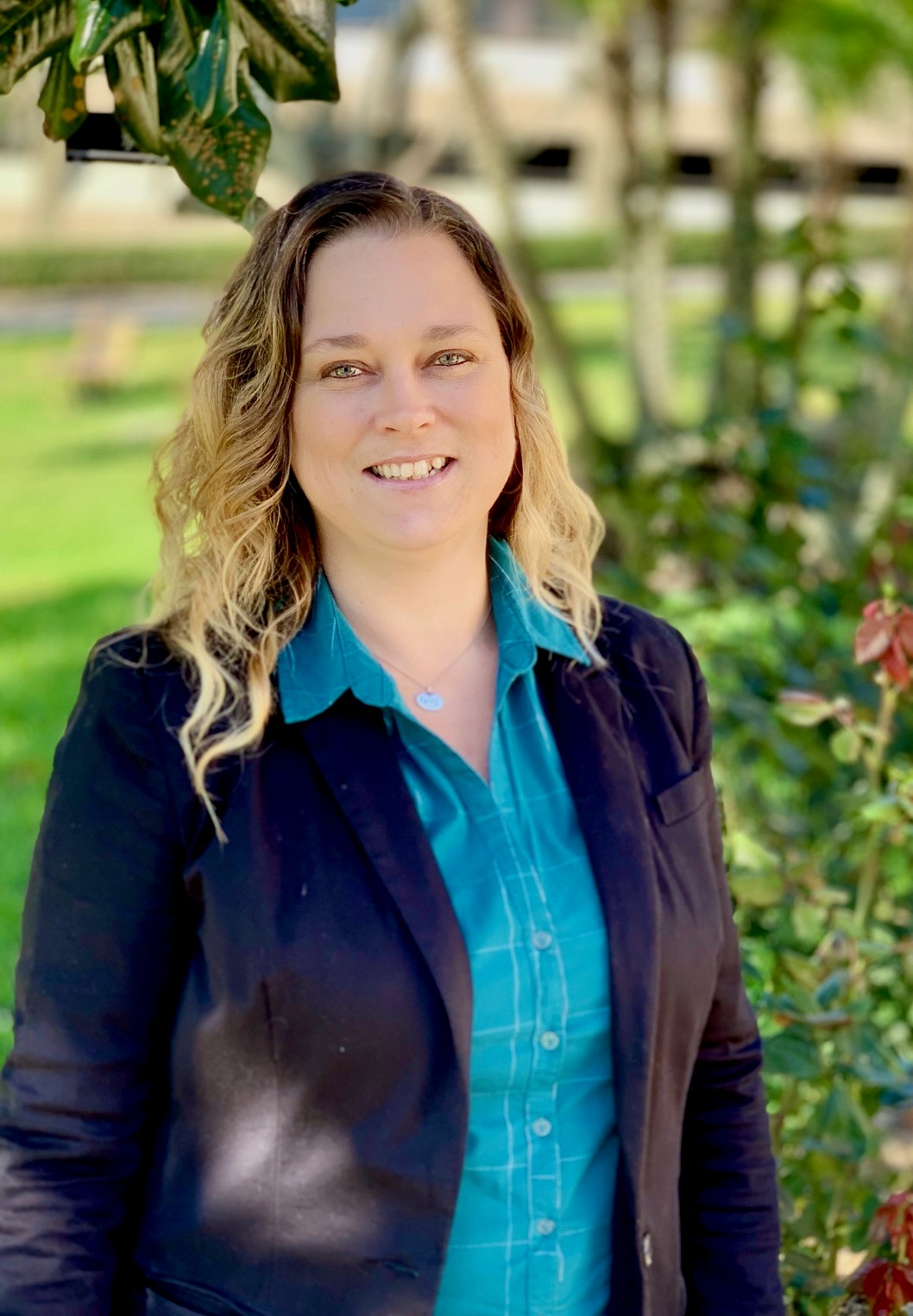 Over the past thirteen years (13), Mr. Reis has served in several Student Services positions, most recently as the Associate Vice Chancellor of Student Services for Keiser University. Prior to working for Keiser University, Mr. Reis worked for a non-profit agency, that was funded by the Department of Juvenile Justice and the Department of Children and Families. He has also volunteered his time in the Lakeland community as member of Career Source Polk Board, Rotary International, City of Lakeland Midtown CRA, the Building Healthier Polk Initiative, and Mid-Florida SHRM. Mr. Reis, a graduate of the Chamber’s Public Leadership Institute of Polk County in 2015, received an Associate of Arts degree in Journalism from Polk State College, a Bachelors of Arts in Criminology from the University of South Florida, and his M.B.A from Keiser University. He currently resides in Lakeland with his wife Leah and 9 year old son Eli.

Jazz is a Polk County native, a pretty cool aunt to a two-year-old niece, and a community activist. She graduated from Polk State College with a Bachelor’s Degree in Business Administration. She previously worked as the membership coordinator for the Haines City Chamber of Commerce (now the Northeast Polk County Chamber).  Before coming to the Lakeland Chamber of Commerce, she expanded their membership from 284 to 326 members. She has professional experience in retail, sales and marketing, and non-profit sector. On her days off from work, you will catch her hanging with colleagues, traveling, and shopping…of course!

Originally from New Jersey, Monica found herself moving to Lakeland at age 10 when her parents decided the harsh winters were just too much. Though the tropical climate took some getting used to, it didn’t take long for her and her three brothers to feel at home within the charming small town that is Lakeland. Seven years flew by and suddenly she was walking across the stage at the RP Funding Center, where she and her siblings all graduated from high school with their A.A. Degree as well, thanks to the Dual Enrollment program at Lakeland Collegiate High School. Florida Southern College then became her new home, where she grew up, formed new friendships, and ultimately received her B.S. in Advertising and Public Relations. In her free time, Monica enjoys artsy D.I.Y. projects, card games, trying new cooking recipes, as well as checking out fun events and all the cool businesses Lakeland has to offer.

After graduating from high school in Colorado Springs, CO, Christina moved to West Palm Beach working for Palm Beach Real Estate & running 3 of her own companies. She comes from an active military family which gave her the opportunity to see many beautiful states. Christina has 3 beautiful children, 2 in college & one in high school. She moved back to Florida after many years living in Dartmouth, MA and instantly fell in love with Lakeland and the Historic District after living in Dixieland. She is excited to be apart of this community and all it has to offer.